Peaceful protest with carnations have provoked the police to use TOMA vehicles at around 9PM (Turkish Time – two hours ahead of GMT). In order to commemorate those that lost their lives during the protests and to remind their demands, Taksim Solidarity invited all to congregate in Taksim with carnations at 5PM today (June 25th). After stating that the protesters were “occupying a space open to the public”, the police started using TOMA water cannons to disperse the crowds. Estimates predicted “tens of thousands” of protesters.

Last time the police intervened, Erdogan had stated that certain marginals within the crowd had been throwing stones and the police had to retaliate. Tonight, the crowd threw carnation flowers at the police…

Update: 10.34  Police have been using water cannons and tear gas intensively over the past hour. Twitter feeds are telling residents in Cihangir, Sıraselviler and other neighbourhoods in Taksim to leave their doors open for people to seek refuge. The tear gas in side alleys are especially bad. Once again, disproportional police violence! 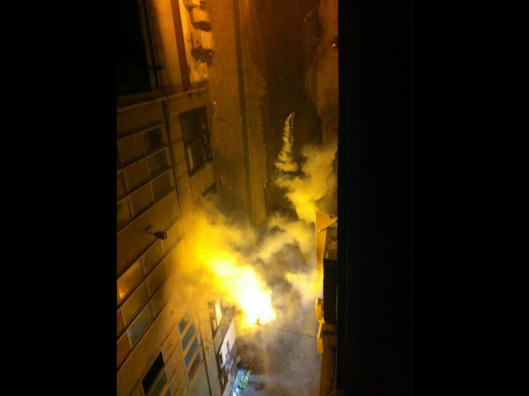 Update: 10.40 CNN Turk, one of the channels criticised heavily for being the mouthpiece of the government have just pulled away from their live feed at Taksim. They are showing constructions that TOKI (state funded) have been erecting.

Update: 10. 42 . The police are only lightly hitting protesters with battons on Istiklal Street (Taksim Highstreet) but is going heavy on protesters in side streets. People are being warned to not flee the tear gas into side alleys..

Update: 10.50. Police have started its assault on protesters in Ankara around Dikmen as I type. TOMA tanks, ‘Scorpion’ jeeps and tear gas equipped policemen

Update: 10.55. Just occured to me, police told people to evacuate Taksim Square, waited for literally 30 sec. and started firing cannisters and moving forward. So why are they waiting down in Cihangir (one potential exit route from the Square)? The only answer is that they want arrests.

Update: 11 gmt The Police have just stopped the live feed of a TV cameraman for Halk TV in Taksim. As if that will magically stop all feeds and updates from around Taksim..:

Update: 9.09 gmt Earlier I stated that Ankara was in a bad state. Further confirmation shows heavy use of tear gas in Dikmen.

Update: 9. 12 gmt This photo is intended as a response to Istanbul Mayor Vali’s statement that there weren’t chemicals in the TOMA water cannons…

Update: (12.17 Turkish Time) Nothing really left to say. A chipped away crowd in centre of Istiklal Street is still resisting. Police just warned the protesters: “Please disperse. If you don’t we will be forced to use force”, said after hours off cruelty. We all know how this ends tonight. But tomorrow, because of today, the crowd will be even more determined. They are still shouting “Jump, Jump, if you don’t you are with Tayyip!”

I wonder what the political landscape would look like if we had a 3%-5% barrier in national elections. It  wouldn’t be about the tyranny of the majority, that much is for certain. 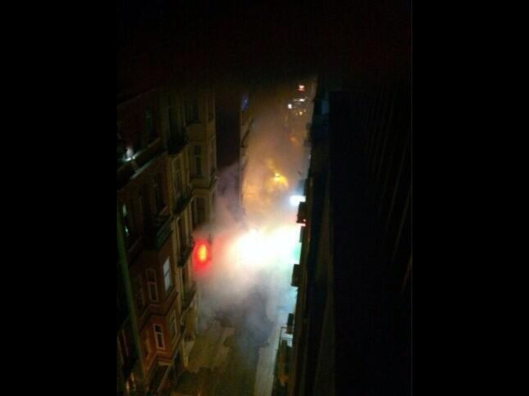 1.03 am: and it continues, police gassed istiklal street, protesters flee down side alley right into the arms of police with shields and battons. Nice way to ‘disperse the crowds’.